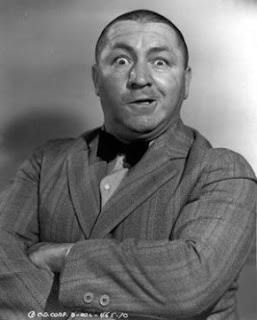 Today I am venturing into my first Blog-a-thon and it's a good one. I have linked up with http://cometoverhollywood.com/.

Curly Howard is not someone who is known for feature films, or by his birth name Jerome Lester Horwitz. He is known as the bald, chubby stooge who takes the brunt of his brother's “abuse” in the wonderfully loved Three Stooges Shorts.

As much as I sincerely adore all the stooges, I was horrified to read that Curly did not live a charmed life. He was at times a lonely drinker who was terrible with money and worse with women. What I found out has made it sad for me to watch the Three Stooges on some days. Just knowing that random strangers would see Curly on the street and poke, kick, and hit him thinking it was funny just makes me sad. Curly was described as quiet when offset (when sober) but, kind. He was known to enjoy people and always want to be with people. Curly was married several times, sadly to women who used him only for his money. After his first major stroke, he finally found someone to care for him and love him. I hope he was able to spend those last few years happy and in love.

Curly Howard was arguably the greatest stooge. If you ask 10 people who their favorite stooge is, 80% will say Curly. He was sweet, childlike, and hilarious. I grew up loving the stooges.

Curly was the first stooge to go. At 48 years old, he had suffered a stroke on the set of his final picture “Half-Wits Holiday” He had completed nearly every scene when his brother Moe found him slumped over in a chair unable to speak.  For years he struggled after his stroke but was lovingly cared for by his wife. The years after the stroke was torture. He was shipped around from home to hospitals, and finally to a sanatorium. After several more strokes, he passed away on January 18th, 1952.

My favorite Three Stooges short as an adult is Cash and Carry, but as a kid, Hoi Poli was the best. The stooges are picked up by two rich men on a bet to see if they can turn these trash men into gentlemen of high society. Sitting and watching this short with my grandfather is one of my greatest memories. The scene where curly gets the spring from the couch stuck to his butt then falls only to pop back up still has me laughing so hard I nearly cry. It was comedy at its best. Nothing perverse, or raunchy…just amazing physical comedy.

You can find the Episode here: http://www.channels.com/episodes/1782595

I can't help but wonder what full feature films The Three Stooges would have made later in their careers had Curly lived into his 80’s. Would Curly have branched out on his own? Would he have lived deliriously happy? Sadly, we will never know. What we do know is today now more than ever the Stooges are wildly popular. People mimic their physical comedy still today. My son has 4 three stooges signs on his wall, and I am a member of the Stooges fan club. I wonder if Curly knows how much he is loved and admired for his comedy? That today he would be put on a pedestal. I hope he is sitting somewhere proud that he is so loved by so many people and a huge part of some people's lives? Let’s hope so.

This blog is part of the Gone too soon blog-a-thon. Check out the rest here!