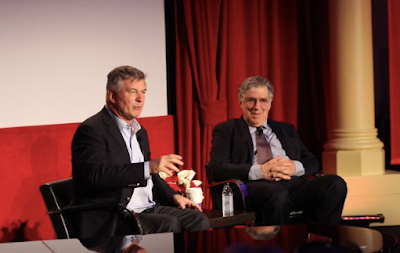 Saturday, April 30, 2016
I only watched two full feature films all day Saturday. The morning started at the historic Grauman's Egyptian Theatre a block from our apartment. I had planned to see Field of Dreams or One Man’s Journey, but everyone was buzzing about the 90th Anniversary of Vitaphone presentation.
Ron Hutchinson, a widely recognized film historian, founded ‘The Vitaphone Project,” which seeks out missing soundtrack disks and picture elements for early talkie shorts and features. The project has found over 3500 previously lost soundtrack discs and restored over 90 early sound shorts from the twenties and thirties.
I love film, and I love history so at the last minute I turned left to head to the Egyptian. I am so glad I did. We were treated to 11 early sound shorts from Warner Bros. They included many vaudeville acts like George Burns and Gracie Allen who was so adorable my heart almost couldn’t take it; Baby Rose Marie and my personal favorite Vitaphone short was The Beau Brummels starring the vaudeville comedy duo, Shaw and Lee. I laughed until I cried at the comedy duo. My heart yearned for Alex because I knew he would have loved the dry and absurd jokes in this short.
I left the Egyptian and went to the Hollywood Roosevelt Hotel where I set up shop for the next eight hours. Club TCM had a day of incredible presentations. The first was Cari Beauchamp’s My First Time in Hollywood presentation. My First Time in Hollywood is a new book by Beauchamp, which is a collection of stories by some of the biggest names of the classic era including Harold Lloyd, Myrna Loy, and Marie Dressler. They discuss what it was like to arrive in Hollywood. Reading those stories were Former Saturday Night Live Star Laraine Newman, Sunset Boulevard star Nancy Olson Livingston, and Suzanne Lloyd, to name a few.
After that, I walked around the Roosevelt Lobby to stretch my legs and ended up meeting Matt from Warner Brothers, we chatting about movies and I walked away from that conversation with a copy of The Best Years of Our Lives for Brian and two autographed copies of The Nutty Professor starring Jerry Lewis.
The next presentation was ‘A Conversation with Elliott Gould.’ Mr. Alec Baldwin was the interviewer, and I had held my seat all day near the front for this one moment. I could have reached out and touched Baldwin, and I had to restrain myself several times from doing so.
I was watching Jack Donaghy from 30 Rock interview Trapper John from M*A*S*H  I heard bits and pieces, but for the most part, I just zoned out and snapped over 1,000 pictures during the hour-long interview.
This was followed by the presentation of Hollywood Home Movies.  The home movies are pulled from the Academy’s collections and show movie stars at home or behind the scenes of different films. I saw Ginger Rogers with bright red hair swimming at her house and Joan Blondell as a WAMPAS Baby Star.
I found a new friend during my earlier tour of the Club TCM room,  Lara who is writing a book about one of my favorite actresses, Marion Davies. We decided to grab some dinner at Baha Fresh before the screening of Midnight starring Claudette Colbert. After dinner we went to get in line two hours early, knowing it was a small theater and big draw. We were numbers 37 and 38 in line. We sat on the floor and talked all about Marion Davies, William Randolph Hearst, and Hearst Castle. She told me about her time spent in France with the niece of Davies and how she had built a friendship with the family. She showed me photos and regaled me with stories that had me green with envy.
There wasn’t a seat left when Bonnie Hunt took the stage to share her love of the Claudette Midnight. She had shared the film with her patients when she worked in a hospital before she became an actress. The comedy was one that I hadn’t seen but one I will be buying as soon as possible. Again the magic of sitting in a full theater laughing with others and sharing the love of a great black and white movie is incredible. Once the film was over, we all cheered and clapped because it was just that good.
I didn’t have far to go because the midnight screening of GOG:3D was right across the lobby. All of my roommates met me at the line to see this much talked about camp classic. I had no idea of what to expect because I hadn’t ever been to a 3D film in my life. I was promised an unforgettable experience, and that is precisely what I got.