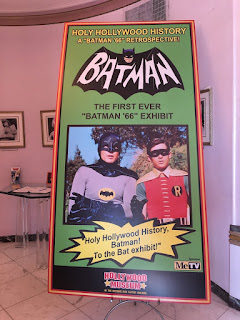 The first official day of the Turner Classic Film Festival was well underway as we woke up bright and early the next morning. We could already hear our fellow classic film friends stirring in the hall and down in the breakfast area as we pulled ourselves together to head out for breakfast. We joined Lauren and Roger again, but this time for brunch at Brite Spot.
We were excited to make it to another part of LA that we hadn’t seen and try to eat breakfast somewhere that wasn’t Mel’s Diner (a place I happen to actually love) or Starbucks. The atmosphere was perfect, the coffee was exactly what I needed and the food, oh so good. I had the Southern Decadence, which was a Biscuit with fried chicken, bacon, cheese, sausage gravy, and an egg. It was incredible, and I loved it. It’s so hard to beat delicious diner food, and this place excelled in great diner food. It was just enough to get me through the busy day ahead and into the late dinner we had planned with Angie later.
We went back to our hotel and went our separate ways. Brian and Roger went for a hike up Runyon Canyon, Lauren went to get ready to walk the TCMFF red carpet, and I went to meet up with my pal Angie from The Hollywood Revue, to catch up and take in the Batman exhibit at the Hollywood Museum.
The Batman ‘66’ exhibit opened in January and I was extremely nervous it would close before we got there to see it. I have always loved Adam West as a person and as Batman, but when he came to the TCM Film Festival in 2016 to introduce Batman the Movie, I was smitten. The interview was incredible, and he was hilarious. I knew if the exhibit was still open I needed to make time before the festival to see it.
The exhibit featured original props and costumes from the show including the Riddler, Joker, Penguin, Mr. Freeze, Batman and Robin's costumes. Life-size sculptures of Catwoman, Eartha Kitt, Lee Meriwether, and Julie Newmar. Yvonne Craig’s Batgirl costume, Adam West’s face and mannequin from life-cast molds (slightly creepy), action figures, puppets, toys, and the Batmobile.
Yes, there was shark repellent bat spray, and yes, it was as awesome as you would imagine. I devoured every moment of the exhibit. It was an impressive collection of memorabilia that I could have sat and examined for hours.
After the museum, Angie and I made our way back to the hotel to freshen up for the red carpet. We didn’t have the pass that allowed us to walk the red carpet, but we could catch the arrivals. This year’s red carpet was incredible, so it will require a post of its own.
To be continued.