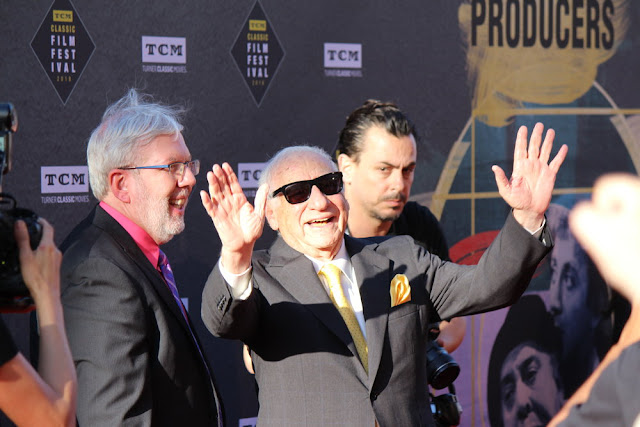 Attending the red carpet arrivals during the TCM Film Festival has been something I have done every year. Each year has been different, but great.
The first year I attended with Angie of The Hollywood Revue and JP of Comet over Hollywood. I don’t recall if we waited in line all that long, but we had great seats that year and in three years of attending TCM red carpet events I can say that first year was the best I have attended. Sidenote: Sean Cameron should emcee everything TCM does.
The second-year Brian attended with Angie and me, and we stood in line for nearly an hour and a half, and we had front row seats. This year we stood in line for a little under an hour. It was warm in the sun, but not as bad as the year before. I had yet to eat at my favorite place, Jinya Ramen, so I ran to get some food to tide me over as we stood in line. I sat on the dirty Hollywood Boulevard curb and inhaled my first ramen meal of the festival. It was as wonderful as I had hoped it would be.
The first two years the bleachers where we sat were at the end of the red carpet facing east, so we had a view of the entire length of the red carpet as the talent walked toward us and did their interviews with the media. This year was much different as they had us placed directly in front of Grauman's Chinese Theater facing north, where we only saw the stars as they curved to make their entrance into the theater from the right side. Arriving from the left side were the TCM Spotlight pass holders who walked the red carpet.
It was kind of fun to have a different vantage point. This year we were treated to some fun stuff as red carpet spectators.
Mel Brooks, a personal favorite of mine walked the red carpet because his film The Producers was the opening night film. Brooks wasn’t able to attend any other events during the festival because he had a show in Vegas.
Paul Sorvino walked the red carpet and stopped near us to sing opera; Dennis Miller, of Saturday Night Live and countless other things, came into the crowd to shake all of our hands. He also told us how TCM is his escape from the real world and told us how much he missed Robert Osborne. It was a touching moment.
Others who walked the carpet were, Cora Sue Collins, The Unexpected Father (1932), Smilin’ Through (1932) Anna Karenina (1935) and Treasure Island (1934); Dana Delany, China Beach and Desperate Housewives; Kate Flannery, The Office; Sara Karloff, daughter of Boris Karloff; Ruta Lee, Seven Brides for Seven Brothers (1954), Witness for the Proseution (1957) and Funny Face (1957);  Leonard Maltin; Ben Mankiewicz; Wyatt McCrea, the oldest grandchild of Joel McCrea; Eva Marie Saint, North by Northwest (1959), A Hatful Rain (1957) and On the Waterfront (1954); Eddie Muller; Melvin Van Peebles, Sweet Sweetback’s Baadassss Song (1971); Mario Van Peebles, Redemption Road (2010); Cicely Tyson, Fried Green Tomatoes (1991) and Sounder (1972); Norman Lloyd, Saboteur (1942) and Spellbound (1945) and the star of the night, Martin Scorsese.
Scorsese was due to receive the first annual Robert Osborne Award. It was to be presented by Leonardo DiCaprio, who sadly didn’t walk the red carpet.
In March 2018, Turner Classic Movies announced the establishment of the Robert Osborne Award, to be presented at the Festival “to an individual whose work has helped keep the cultural heritage of classic films alive and thriving for generations to come.”
The award was presented by actor Leonardo DiCaprio who is a frequent collaborator with Scorsese. During his introduction, DiCaprio discussed Scorsese’s Film Foundation, founded in 1990, which has emphasizes the importance of film preservation.  “The impact of Marty’s passion and his dedication to cinema is absolutely immeasurable,” DiCaprio said.
During Scorsese’s speech, he talked about the importance of educating younger generations on the value of knowing the history of a film. During his speech, Scorsese referred many times to cinema’s place as the art form of the past 100 years. He praised the late Robert Osborne saying some historians make you feel like movies are over your head and others who look back with a mix of irony and nostalgia. However, as Scorsese emphasized, Osborne “understood the value of cinema, and that movies are always under threat.”
Some of Scorsese’s most notable work includes: Taxi Driver, Cape Fear, Goodfellas and The Departed.
The theme of this years festival was “Powerful Words: The Page Onscreen.”
Newspapers seemed to be a reoccurring theme for the festival this year with several films highlighting the power of the press through the written word. Movies included in that category were His Girl Friday (1940); Blessed Event (1932); The Miracle of Morgan’s Creek (1944); Mr. Smith Goes To Washington (1939); and Woman of the Year (1942). Each film dealt with newspapers or the storyline directly affected by someone working in the newspaper field.
After the red carpet, Brian, Angie and I walked down to Pig ‘N’ Whistle for dinner. The first block of movies had started, and we had time to kill before the next block of films began. After dinner, Brian and I went to get in line for Stage Door a personal favorite of mine. I was thrilled to be seeing one of my favorites on nitrate at the famed Egyptian Theater.
The film was beautiful and every bit as amazing as I had hoped. It was the perfect way to kick off the first night of the film festival.