TCMFF 2018 Sidebar-Turner scripted shows are not to be ignored 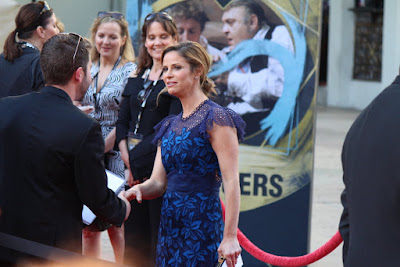 About the red carpet.
Before we get into the Mel Brooks of it all can I start by saying that if you are not watching the shows that Turner networks are producing, then you are missing out. I have always had a bit of a soft spot for Turner (TBS) original shows.
In 2006 TBS first aired one of my all-time favorite shows, My Boys. The show revolves around sportswriter PJ Franklin who is searching for love with the help of her closest friends, her ‘boys,’ if you will. She isn’t super feminine and relates more to the men in her world than women. (I relate to it on so many levels.) The show lasted four seasons and is indeed a gem. Please purchase it on DVD immediately. The writing is fantastic, the assembled cast is perfect, the show is just butter. PJ Franklin (Jordana Spiro) is and was everything I want to be in my life and career and who wouldn’t love to be surrounded by good-looking and funny men like Reid Scott, Michael Bunin, Jamie Kaler, and Kyle Howard? I mean come on TBS. One of the greatest crimes Turner has ever committed was canceling that show. It still stings when I think about it.
Years later TBS started to pick up their game again with programs like The Detour, Angie Tribeca, People of Earth, Search Party and Wrecked. Listen I'm a TV junkie, and I like my sitcoms, but I am picky about what I watch. I have limited time in my day, and if I'm going to spend it on any time of film or television, it better be funny and smart. TCM, Turner, TruTV, TBS, none of these people pay me to say that, and I love every single one of these shows.
Imagine my delight when the first year I attended the TCM Film Festival they had three stars of the television show Wrecked walk the red carpet. It was great exposure and fun for someone like me who genuinely loves that show.
The second-year I don’t recall seeing anyone but this year guys. Hold on to your damn hats because this year my queen walked the red carpet.
I have been a significant fan of Andrea Savage for 14 years. Before Step Brothers, before Dinner for Schmucks, VEEP and Party Down, Bravo aired a little show called Significant Others. Before Bravo was all Andy Cohen and Housewives it was an actual network that had other shows in rotation. Significant Others came in with little warning, but I was hooked. I love this show so much that I actually took to VHS tapes and taped all the episodes, and I still have them all on VHS and watch them to this day. The show followed four couples in and out of therapy. Savage is hilarious in this show, and from then on I was a fan. I think she is one of the absolute funniest women out there. I was elated when she landed a show on TruTV.
I’m Sorry is about a comedy writer (Savage) who is balancing her work life and motherhood, but this show isn’t some old school goody-goody motherhood work stuff. For me, it’s a more realistic look at life. The show is one of the funniest on television right now and is incredibly relatable. Show creator, Savage plays it is a little immature and neurotic and blunt, like me. The way she plays a mother and wife on the show is closer to how I am as a mom and wife than any other representation on television. I dig that. Tom Everett Scott plays her husband, and the always incredible Jason Mantzoukas plays her writing partner. Judy Greer also has a recurring role, and Nick Kroll has popped in. I also want to shout out that besides Savage writing on the show, some other hilarious women write episodes as well, like Dannah Phirman and Danielle Schneider. This show is indeed a who’s who of comedic genius.
Cut to the red carpet at the TCM Film Festival this year and who comes strolling down, but Ms. Andrea Savage and Mr. Tom Everett Scott. The 13-year-old in me was going bananas that Shades from That Thing You Do was gliding by as if it were nothing and the 34-year-old in me was going bananas that one of the funniest women on the planet was passing by me as if it were nothing. So I did what any normal human would do. I ignored Tom Everett Scott and yelled ‘Andrea’ at the top of my lungs and waved at her. Like any sane person would do. Women support women. I wouldn’t change a thing, and I would do it over again.
Thank you, TCM for recognizing Turner network’s original scripted shows and throwing them into the mix. They don’t go unnoticed.
Now TCM, please bring back My Boys and let the Impractical Jokers host a Harold Lloyd or Buster Keaton event next year. Brian Quinn is a fan. Please think about it. 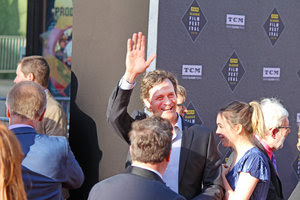