TCMFF 2018 - This aggression will not stand, meditation with Jeff Bridges 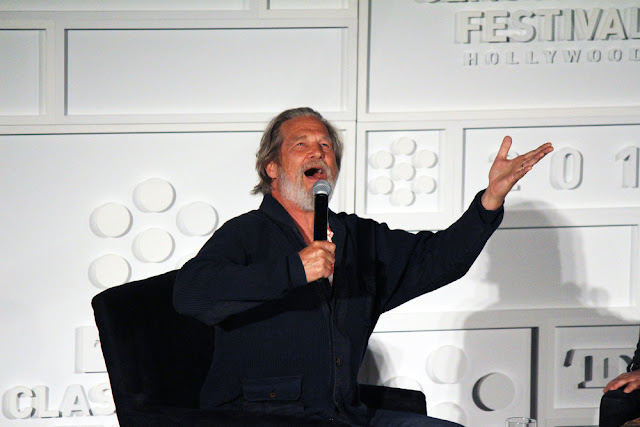 Saturday, April 28, 2018
I made it to Grauman’s in time to get in the massive line that ran right along the NYSNC ‘Dirty Pop-Up Shop’ line. People were confused, myself included and some were in the wrong lines, myself included. Once I was directed to the correct line, I tried to salvage what I could of my purse and make sure all I had all of my belongings. Luckily here we are nearly six months later, and I’m not missing anything, so that’s good. I stood in line for maybe half an hour or so. It really didn’t seem like long at all.
The street hot dogs have smelled so dang good for three years now, and I was dying for one. Unfortunately, I always get talked out of getting one. Everyone thinks I'll get sick from it and I shouldn’t trust ‘street meat.’ I disagree and if you have eaten one of those delicious dogs being made on the street on a pop-up cart next to a guy holding a snake, please send me an email and let me know that you're alive. I would like to use you as proof that I can live through a street dog next year. I settled for more ramen because I will never get sick of it, ever.
Brian was quite a bit ahead of me in line, so he was in the theater sooner and got us seats while I purchased us some incredibly expensive but incredibly necessary White Russians.
One sip and I was drunk.
The biggest complaint I have about the film festival this year is that they didn’t do the big interview with a celebrity at the Ricardo Montalbán Theatre this year. That is something I look forward to and something you absolutely don’t get anywhere else. Luckily the interview with Jeff Bridges prior to Big Lebowski kind of made up for that.
This is a movie that I was never fully into until I was in my 20’s. I never appreciated it for what it really was. I couldn’t tell you what that is but whatever it is, it's great. Jeff Bridges talked for quite a while and opened by not knowing what anniversary the film was celebrating. I thought that was fitting. He led the entire audience in meditation which was totally unexpected. If you had asked me what I would be doing as I entered that theater, meditation with Jeff Bridges and hundreds of other people wouldn’t have even crossed my mind.
Some highlights from the interview:
Bridges has the sweater and shoes from the film, not the rug. He said the clothes for the film were his. The costume designer came to his home and found most of the wardrobe for the Dude in his closet.
He said it was so cool to face off with Ben Gazzara and he was so wonderful to work with. He discussed Iceman Cometh, but honestly, I can't remember a lot of what he said about it. I can tell you that during those interviews you get to see during the festival it is so surreal. The first year I tried to take notes and record a lot, so I could ‘report back’ for the newspaper. For the past two years, I have been better at just enjoying it. There are moments that I have to stop and tell myself to ‘realize where you are and enjoy it, take it all in so you remember this feeling and this moment.’ This was one of those moments. I have some audio from this interview, but I can't find it at the moment. When I do, I'll add to this post.
The interview was incredible. Bridges is highly entertaining and fun just to sit back and listen to.
The Big Lebowski (1998)
“The Dude” (Jeff Bridges) Lebowski is mistaken for a millionaire Lebowski, a couple of guys break into his house and pee on his rug that happens to tie the room together. He goes to the millionaire Lebowski’s house to ask for the money to pay for his rug, he accepts a job to pay some people off and find the rich Lebowski’s wife Bunny. His bowling buddies Walter (John Goodman) and Donnie  (Steve Bucheme) try to help, but there just a lot of white Russians, mix-ups, and dudery.
I could go into the entire plot, but there is just so much to unpack. So if you want the play by play, I suggest you watch it. Better yet, I plea with you and beg that you watch it.
Getting to see it in a packed Theater like Grauman’s was incredible and getting to see it while drinking White Russians and being introduced by Bridges, well that was on another level.
The movie went a little late due to Bridges unexpectedly long interview, so we decided just to go back to the hotel and call it a night so we were all rested up for the last day of the festival. . I