FilmStruck - It's a damn shame 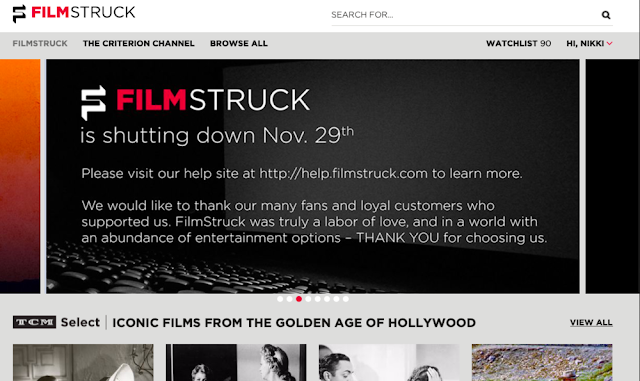 Right now I am in between articles at a job I enjoy. Is it my dream job? No-I am one of the millions of people who get up every morning and go to a job I don’t love. I just finished an article about the Sheriff and the Police Department having a dispute. Next, I will work on an article about the local Girl Scout Troop attending a funeral for one of their own. I don’t get to write about what I love-which is Classic film unless I write about it here for free.
When I’m not writing for the newspaper or writing here I’m reading about Classic film, or I’m watching it. The most significant source for classic cinema is TCM or FilmStruck-or it was. Tomorrow we lose one of the two most significant sources of classic and unique films. What a damn shame it is for all of us.
Two years ago my film pallet included classic films that I was able to catch on TCM, movies that everyone knows from the seventies and eighties like Terms of Endearment, Caddyshack and Ghostbusters, and the films I have grown up with and watch now. I felt that I had a good knowledge of movies.
Then came FilmStruck.
FilmStruck means a little bit of something different to everyone. It was introduced to it at a particularly difficult time in my life. I was in a tailspin of depression that I hadn’t quite recognized yet and I was going home from work every Friday afternoon and not getting out of bed until I had to go back to work on Monday morning. During that time I had many hours of films to watch.
Guys, do you know who I was introduced to during those dark days?
First, let me tell you that I traveled to Grey Gardens so many times with Big Edie and Little Edie. Those two brought me so much joy and so many laughs. I feel in love with Little Edie, and now as I’ve started to claw my way out of that dark time in my life, Little Edie remains such a bright light in my world.
I had dipped my toe into foreign films thanks to TCM about a year before the launch of FilmStruck thanks to one Black Friday showing of Il Sorpasso, but, FilmStruck introduced me to Betty (Blue) and Zorg and their intense and troubled love affair. It reminded me that great films come from all over the world.
When I had men come at me at work and make snide comments about the job I was doing I would find a great woman director or dominant female lead or both like Lily Baldwin in Swallowed. That isn’t exactly a film I can find floating around just anywhere.
This fall I wanted a refresher on all of the previous A Star Is Born films, and FilmStruck gave me all of them to watch before going to see the Bradley Cooper version. I didn’t have to rent them all or go buy them. They were all right there, and I was able to sit on a Saturday and watch them all in one place. That is something that I took for granted, but appreciated so much.
I also appreciated that I was able to see people I genuinely like live their dreams and work writing about the films they care about and produce content that mattered to people like me. Did they know that there were people like me who were sitting in bed, unable to get up and take a shower or change their clothes or even function some days? Did they know that some days the only human contact I had outside of my immediate family were the intros that were on FilmStruck or TCM? That was the only thing I really looked forward to. I needed and craved that knowledge to keep me going another hour or day. It was a choose your own adventure game for film lovers, and for a full calendar year I needed it, and it got me through many weekends. 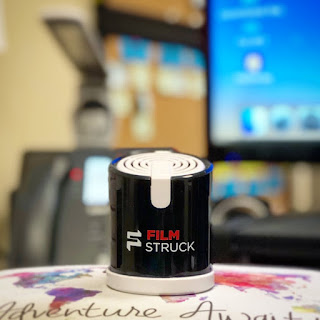 The people of FS were living the dream and I envied that so damn much. They were some of the lucky few.
Thank you, everyone, at FilmStruck for all you did for so many. Tomorrow or Thursday or whenever I log in, and there is nothing, it will be such an empty and sad feeling. It will be a little jarring because it was such a fear I had every weekend when I came home and climbed in bed to get ready for my ‘hibernation’ from the world for a few days. I was always scared that I would be abandoned.
I hope FilmStruck finds another home-you will all be missed more than you know.
Thank you so much for getting me through.