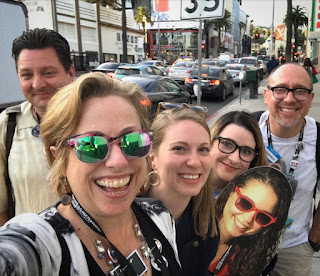 If you’re a TCMFF or Classic Film fan and you were on Twitter you may have seen this Hashtag floating around the during the film festival this past April.
Months before the Festival Raquel over at Out of the Past announced that she wouldn't be able to attend because she had the opportunity to cover some SXSW. We were all sad and tried to make light of the fact that we would miss seeing her always present face around the Roosevelt and Hollywood Boulevard this year.
I made the joke about making a #FlatRaquelTCMFF to bring to the Festival this year and kind of laughed it off but took the temperature of the room. You know those big heads you see at basketball games? The photo that has been enlarged and cut out to hold up during sporting events? I thought it would be fun to make one of Raquel and carry it around the Festival to take photos with and give her a TCMFF experience so she felt like she was kind of there and missed. It started as a joke, like "Wouldn't it be fun if we did this," but it turned into, "I am totally doing this!"
I ordered from a company I had heard of that had pretty good reviews and the next thing I knew I had three (buy one, get two free!) human head-sized Raquel's to take along to the Festival.
Raquel has been a massive support system to me during the past few years during my anxiety and depression issues and she has really supported my writing. Also, this was going to be my year of 'yes,' (do more, get out more and be more) so I was extra bummed she wasn't going to attend.
What ended up happening with #FlatRaquelTCMFF was what happens with my camera during storms.
Stick with me here.
I am deathly terrified of storms, and I have been since I was a kid. When we had a tornado WATCH, not even a warning, I would be in the basement closet crying waiting for my world to end while everyone else would be going about their business. When I decided I wanted to become a photographer and now take photos for the paper, I found a certain kind of safety behind my camera. When I am taking pictures, I feel protected from the storm. I can't explain it, but if I am behind my camera, I can get through a storm with no issues. So when I showed up in Hollywood armed with three Raquel's, I was more willing to put myself out there and talk to everyone. It was a great conversation starter, and everyone knows and loves Raquel, so I had people that I didn't really know coming up to talk to me about it.
Honestly, #FlatRaquelTCMFF led to this being the most social TCMFF I have ever had and also the best. I missed several films but had a wonderful time. I put myself out there and had an absolute blast.
A couple of the #FlatRaquelTCMFF cutouts went on their way with other people, while one stayed with me. I tried to get as many photos as I could, but there were times that I just couldn’t do it like when I was totally ass-backward for Jeff Goldblum but can you blame me?
This was our schedule:
I took her along with me on Wednesday, April 10, as I went to lunch with Angie at 25 Degrees at the Hollywood Roosevelt Hotel; on a tour at the Academy of Motion Pictures Arts and Sciences Margaret Herrick Library in Beverly Hills where she got a photo with an Academy Award; and finally dinner at Mel's Diner.
On Thursday, April 11, we checked out some signage around the TCL Theaters and checked out the red carpet arrivals for When Harry met Sally.
On Friday, April 12, we went to see, Merrily We Go To Hell, Sleeping Beauty, went to lunch at Mel's Diner with Guy, Jax, JP, and Brian, went to see Sunrise: A Song of Two Humans, Vanity Street, had a photo sesh at the Egyptian with Jill, Wade, and Joel, went to see Goodbye Mr. Chips and finished with a late dinner at In and Out.
On Saturday, April 13, we hit Starbucks hard and took some photos in front of the Hollywood sign before we sat for nearly four hours in line for Nashville to see Jeff Goldblum, then waited for him afterward and saw Norman Lloyd as we waited. Then we went to eat again at 25 Degrees and went to see The Bad Seed, poolside at the Roosevelt with Erin McGee before we had a few drinks into the wee hours of Sunday morning.
On Sunday, April 14, we slept in and missed two blocks of movies (I swore I was never drinking again) before we made the trek up to the American Legion, Hollywood Post 43 to see Yours, Mine and Ours and Cold Turkey, grab some ramen at Jinya and attend the closing night party where we took photos with Alicia Malone, Leonard Maltin and cheers with lots of friends.
I am sending Flat Raquel home to where she belongs today. Thank you for the boost in confidence, the laughs and I hope to see the real gal next year!