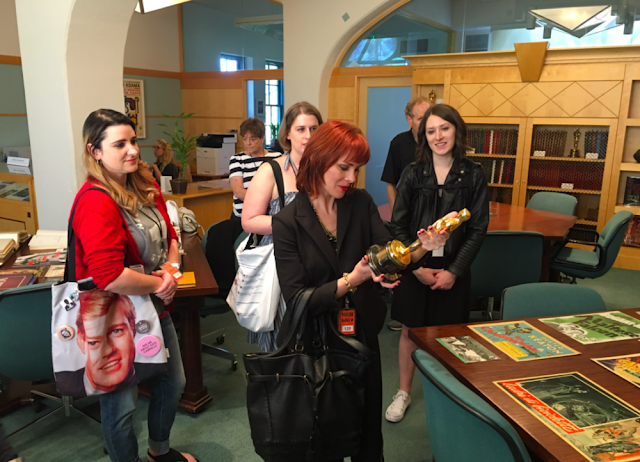 The 2019 Turner Classic Film Festival was held in Hollywood, April 11-14. This year, like each year prior, we landed and hit the ground running.
As a member of TCM Backlot, I entered a contest to win a chance to take a private tour of the Margaret Herrick Library. The Library, located in Beverly Hills is an extensive collection of memorabilia including artwork, special collections, photographs, research materials, and so much more. After meeting up with some friends in the Hollywood Roosevelt Hotel lobby, I met with Angela (Hollywood Revue) for our annual lunch at 25 Degrees.
I invited Angela to be my guest on the tour of the Library, so after lunch, we headed for Beverly Hills. The Margaret Herrick Library is the main repository of materials of the Academy of Motion Picture Arts and Sciences. The Library contains a digital repository full of historical documents including those related to the Oscars award show. Created in 1928, soon after the Academy of Motion Pictures Arts and Sciences the large building holds over 30,000 books; 80,000 screenplays, 35,000 posters; 2,400 periodical titles; and ten million photographs. Margaret Herrick worked to have the Oscars broadcast on television and worked to get the first acquisition of an archival collection. She worked as the AMPAS librarian before becoming an executive director until 1971, upon her retirement. The Library moved to the former waterworks building, where it stands now in 1971. There are four main divisions; the general reference, special collections, graphic arts department, and the photo archive.
The tour we went on allowed us to see the most incredible photographs from films showing at the festival and others including North by Northwest, The Sound of Music, Gravity and Casablanca.
We were also shown how they restore materials that have been damaged or arrive in bad shape. My favorite part was seeing the original sketches from Gone With The Wind, including Scarlett’s famous green dress and sketches from Sleeping Beauty. That was so incredible to see such gorgeous artwork from a film I hold so near and dear to my heart.
The staff of the Library also pulled a large collection of memorabilia from the film’s being shown at the Festival. We were able to look at Scarlett’s broach from Gone With The Wind; a first edition Gone with the Wind book signed by the entire cast of the film; notes from Dark Passage; a call sheet from Butch Cassidy and the Sundance Kid and so many more incredible treasures.
We weren't allowed to take photos during the tour and had to keep our phones put away so I don’t have any photos of what we were able to see, but I was allowed to hold an Oscar. Each of us took turns holding the heavy statue before the tour ended.
After the tour, Julia, Angie and I went back to Hollywood and I got ready for dinner with friends.
The photo attached to this post was taken by a member of Turner Classic Movies for use on their website.