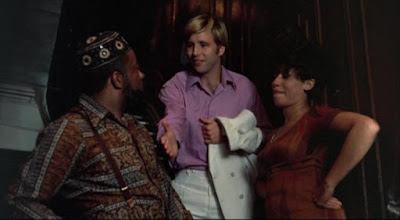 This weekend I was stuck in bed with a migraine and stumbled upon the 1970 Hal Ashby film, The Landlord. The film was on TCM at some point and when I watched something on Demand I let it keep playing and ended up watching this. I’m so glad I stumbled onto this gem.
The politically charged film, based on a novel by Kristen Hunter is extremely choppy, and in my opinion, I rarely found any comedy in this sad and eye-opening film. I did find heart in the evolution of Elgar, Beau Bridges, and strength in Francine, Diana Sands.
Elgar is a rich, clueless, white guy who buys a building in the prominently black neighborhood of Park Slope in New York City. His new house is full of tenants that he needs to kick out so he can turn his home into a bachelor pad.
Soon after getting to the building he's chased down the street by some tenants of the house. Upon returning to the home, Elgar encounters a shotgun-toting woman, Marge (Pearl Bailey) who he ends up befriending and having dinner with her. During dinner, he meets the flirty housewife Francine who is married to Cope (Louis Gossett Jr.), a hot-headed activist.
While Elgar is trying to deal with his tenants, he meets and falls for Lanie (Marki Bey), a mixed-race dancer at a local club. He mistakes her for being white, and she quickly corrects him. He tells his mother, played by Lee Grant that he may be falling in love with a black woman.
As Elgar continues to get to know the tenants, he gets mixed up in a love triangle with Fanny and Lanie.
Elgar's mother Joyce comes by the house one day to check in on her son and bring some fabric for drapes and ends up in the apartment of Marge where they share drinks and ham hawks for hours. Joyce ends up drunk in what can be the only genuinely comedic piece in the movie. But Joyce later comes back to confront Elgar after her time at the house, and it ends with a bitter explosion and her leaving in a rage. The last half hour of the movie is heartbreaking.
Don't read ahead if you don't want spoilers.
During the confrontation with his mother, Francine shows up to reveal that she's pregnant with Elgar's baby. She goes to tell Cope that she's pregnant and it's not his baby. He goes mad with an ax and Elgar tries to intervene and stop him. He loses his mind and has to be taken away. Through a choppy montage, it's revealed that Francine has the baby and she doesn't want to keep it because she loves Cope. She does request that the baby is raised white.
Elgar goes back to the house and packs all of his belongings and tells the tenants that the rent checks are to now go to Cope and Francine. He takes the baby and goes to find Lanie at her apartment.
That's where it ends.
I thought everyone in this film was tremendous. The acting was superb. I was taken aback by some of the cuts and seeing blackface at one point during a costume party.
Lee Grant was nominated for an Oscar as best supporting actress in her role, and yes, she deserved that nomination. She was terrible, funny, and a real piece of work.
I came into this film with no expectations, but it's a film that will stick with me. I would recommend it to anyone if you have some time and want to see some great acting.