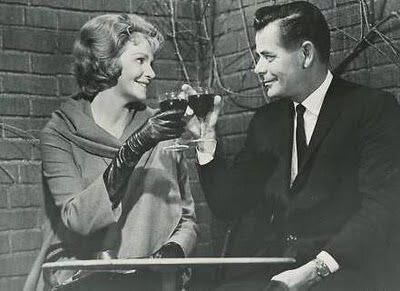 During the most recent Warner Archive sale I made a big purchase. Among those DVD’s I bought was Dear Heart. The first time I saw this film on TCM I fell in love. It was the first Geraldine Page movie I had ever seen and I was smitten with her.
Released in December 1964, this sweet movie tells the story of Evie Jackson, played by Geraldine Page, who is attending a postmaster’s convention in New York City. Harry Mork, Glenn Ford is also in New York City working as a greeting card salesman who has accepted a new job. He is on the hunt for an apartment for him and his fiancé Phyllis, Angela Lansbury.
Harry and Evie are staying in the same hotel and have an encounter at a restaurant sharing a dinner table. After a brief separation, the two come back together and attend some of the Postal Convention. Harry offers to escort Evie to the Statue of Liberty the next day but breaks their date to go apartment shopping. Harry finds Evie later and asks her to accompany her to dinner and to show her the new apartment he has picked out for him and Phyllis.
Evie thinks that Harry is going to ask her to move in with him, but she realizes that he does intend to live with his fiancé in the apartment he has picked out. The two return to the hotel where Phyllis soon arrives. After he shows Phyllis the apartment he has chosen for them he realizes that she isn’t interested in domestic life, but instead wants to travel and be waited on in hotels.
Evie leaves the convention early and goes to the train station. Harry realizes he loves Evie and has her paged to meet him where they reunite.
This film is so sweet. It was Geraldine Page’s first solo leading lady role. When the film was released a reporter for the New York Times called it “a stale, dull and humorless pretension at what its producers dare to describe as ‘gay, sophisticated comedy,’ and it makes almost scandalous misuse of the recognized talents of Geraldine Page.” Like so many other wonderful classic films, this one was overlooked and panned. I don’t feel that anyone else could have given this film as much heart as Geraldine Page. You want to hug her and tell her that she is wonderful throughout the entire film.
The theme song, ‘Dear Heart’ was nominated for an Oscar for Best Original Song. The film wrapped on November 22, 1963, the day President John F. Kennedy was assassinated.
If you ever get a chance to see this film on TCM, please take the time to watch it. You won’t regret it.
Love and kisses, Bimbo Jones