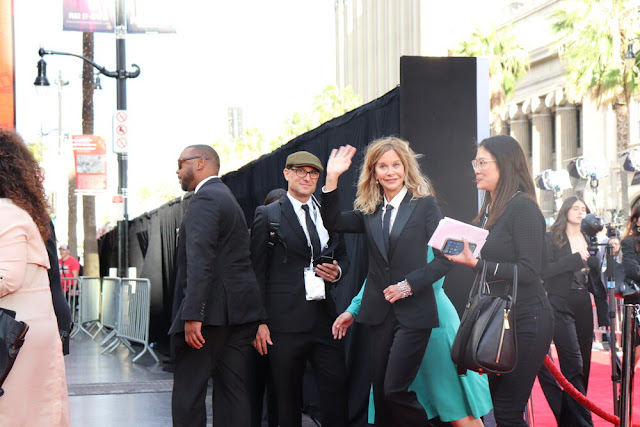 I woke up a little worse for the wear on the first ‘official’ day of the Turner Classic Film Festival, but nothing could keep me from having a fantastic day. A night of sugary drinks while looking at the brilliant cast of Vanderpump Rules was precisely how I wanted to start my fourth trip to Los Angeles. We were more than ready to kick off the first official day of the Turner Classic Film Festival.
Since the first year, I attended the festival, I've sat on the Red Carpet opening night to watch the celebrities. My friend Angela suggested I join her during my first year, and I loved it. Sitting at the end of the red carpet set up on Hollywood Boulevard is so exciting. Looking around and seeing the celebrities, Grauman's Chinese Theater and The Hollywood Roosevelt is surreal. I have been lucky enough to see Alec Baldwin, Meg Ryan, Billy Crystal, Ted Turner, and countless other celebrities. The most exciting part is waiting for them to make their way through the press and over to the fans seated at the end. Many of them will stop and chat with a TCM Host or employee.
This year we were front and center on the bleachers for the arrivals to When Harry Met Sally. I have written before about how much I look up to Ted Turner, so getting to see him walk the red carpet was a dream come true. I also had a fun exchange with Mario Cantone. He was presenting the Judy Garland film, The Clock, the next day. I was carrying my Robert Redford bag that Angie gave me, and saying he loved it would be an understatement. I also had a button that read, 'Ask Me About Robert Redford.' He said, 'No, you ask ME about Robert Redford.' He then told us a story about working with him. Luckily I caught it all on video. It was such a fun exchange you only get when you attend the red carpet arrivals. Others we saw on the red carpet were, Kevin Brownlow, Rob Reiner, Kate Flannery, Eddie Muller, Ron Perlman, and Dennis Miller also loved my Robert Redford bag.
We heard a rumor that Jane Fonda was going to be walking the red carpet, so I insisted we stay longer than usual, like until they were packing up the bleachers. She never did walk the carpet, but I don't regret waiting. If she had, I would have been devastated to miss her. I had planned to try to get to the showing of Dark Passage at the Chinese Multiplex.
Dark Passage tells the story of Vincent Parry, Humphrey Bogart, who is convicted of killing his wife. He escapes from prison and has plastic surgery to alter his appearance while on the run. He finds himself held up in the apartment of Irene Jansen, Lauren Bacall, as he recovers. The film is told from his point of view for much of the first half, so you only hear Bogart, and you don't see him. Parry spends his time trying to prove his innocence and falls in love with Bacall. Dark Passage is my favorite Bogart and Bacall film, and I was so excited when they announced that they would be showing it on the big screen, but after waiting for Jane, we decided that we would never make it.
Angie, Brian, and I continued our tradition of getting dinner at Pig' N' Whistle so we could be right by the Egyptian for the showing of The Bachelor and The Bobby-Soxer. Brian loves this film and was excited about catching it on the first night of the festival. Unfortunately, by the time we finished dinner and drinks and went to get in line, we realized that everyone was excited about this nitrate showing. We decided not to wait in line and go back to the TCL Multiplex and watch Mogambo. I know, guys! I don't hate this film and Brian had never seen it, so I thought it was a safe option. We got in and sat down just in time for me to start to feel crappy. I ducked out to go to bed early while Brian stayed for the movie. (He didn't love it, haha.) Mogambo stars Clark Gable, Ava Gardner, and Grace Kelly. Its a remake of Red Dust which starred Clark Gable in the same role. I am not the biggest fan of Grace Kelly, but Ava Gardner is so beautiful and wonderful in this film you're (I'm) never on Kelly's side. Hunter, Victor Marswell (Gable) ends up in a love triangle with Kelly and Gardner's characters. Call it a flaw, but I like this film. We were so exhausted that I don't regret going to bed early. We still had a full three days of films, and fun to make up for it, and boy did we.