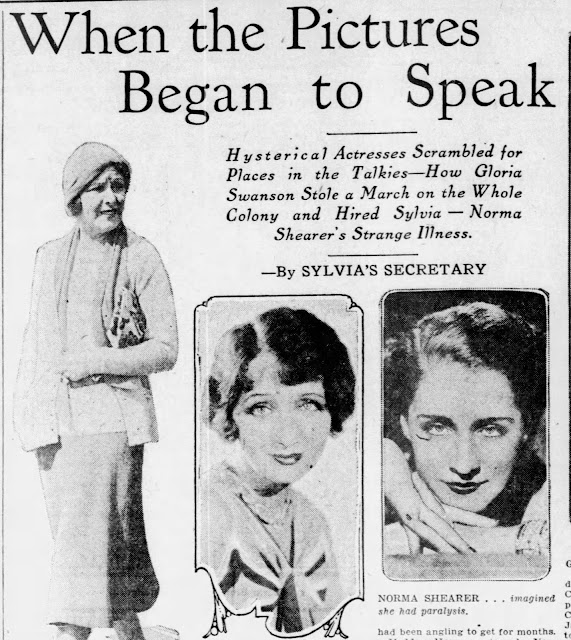 When the Pictures Began to Speak

An excerpt from part four of the series, “of intimate articles on the Hollywood experiences of Sylvia, the masseuse who made a specialty of beautifying the picture people.”

Hedda Hopper steered Norma Shearer into Sylvia’s hands. At that, the boss nearly lost the MGM, star after the first treatment, which was given in Shearer’s home. Norma had been playing a lot of tennis and had got stringy and muscular and jumpy, the way women always do when they go crazy about any sport. The first thing to do was to calm her down and get her to sleeping regularly as a preliminary to softening her. So the boss rubbed her for nearly two hours and left her sleeping like a child.

The next morning we got a phone call from Hedda Hopper, who said: “I don’t know what you did to Norma Shearer, Sylvia, but my name is mud in the movies if you’ve ruined her.”

“Why, what’s the matter?” asked Sylvia.

“She’s half crazy,” wept Hedda, “I’m with her now. She’s in the next room and Irving’s with her” (Irving being Norma’s husband and the big guy on the MGM lot.) “And they’re sorry I ever brought you to her.”

Well, with a few more hysterical words Hedda conveyed the idea that Mr. Thalberg and Norma and Hedda herself were convinced that Sylvia had crossed up a nerve or something and that Norma was getting paralysis. Because they had read somewhere that paralysis attacks one side of the body, and all these marks were on the same side.

The boss got frightened herself and hopped over to the Thalberg house in her pajamas. She found them hanging over Norma in bed. Norma was keeping her nerve-suspecting the worst, but heroic withal-and was consoling Irving with the idea that maybe it was all for the best; that she had had all the principal thrills of a movie career anyway, and maybe now it was the hand of Providence pointing out that she should give it up and be a wife and mother. T was an affecting and tragic scene.

They didn’t shriek at Sylvia, but Hedda with a simple dramatic gesture full of dignity merely led boss to the sufferer’s bedside and pulled back the sheet. Sylvia took one look and let out a laugh. Then she slid her hand under the incipient paralytic’s body and yanked out a coarse linen ribbed bath towel. Norma had slept all night on the towel which had been used that evening before as a massage mat, and naturally, the side which had pressed on the ribbed towel all those hours was marked like a waffle. She has delicate skin, anyway, that takes a mark like a chamois kid.

In spite of being relieved of her fear, Norma wasn’t sure she would continue Sylvia’s treatments and needed to be nursed and patted back into client humor. If the boss took Gloria Swanson’s offer and told Shearer that she would have to wait three months for her next massage, it was certain to mean a famous customer offended and lost.