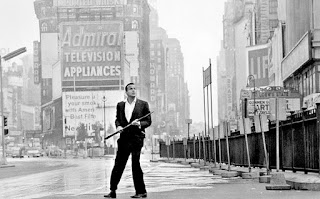 Turner Classic Movies has announced a few of the films they will be showing during this year’s Film Festival. The TCMFF held in the heart of Hollywood is in its 11th year. The 2020 dates are April 16-19th and passes are available for purchase here.
By this time each year, my excitement is at a fever pitch. We are only weeks out from the event and after a few films are announced I start planning. It’s really impossible to plan for the event as a slew of films will still be announced, but usually, there are a few that make you giddy.
This year the films that have me ready to get in line now are:
The World The Flesh and The Devil (1959)
The premise of the film is that Ralph (Belefonte) is a trapped miner who digs himself out and finds that all of mankind has been destroyed in a Nuclear holocaust. He goes to New York City and finds he is alone until he comes across Sarah (Inger Stevens) Together they grow close and survive until Benson Thacker (Mel Ferrer) shows up and puts a kink in their friendship.
I remember the first time I saw this movie. I was in absolute awe of Harry Belefonte and Inger Stevens. their chemistry is fantastic and who can resist Belafonte’s voice and charm? I felt like I was the only person who had seen this film and wanted to scream about it from the rooftops. It left such an impact on me that I begged everyone I knew to watch it. This film certainly deserves its own post in the future!
This year the TCM Film Festival will be showing this movie on 35 mm! it will be next to impossible to resist this showing. Go ahead and picture me in line for this film.
Jewel Robbery (1932)
Who doesn’t love a Pre-Code? When I see the pre-codes on the line-up I know that there’s a good chance I’ll be seeing one of these babies on Sunday as a TBD film. The lines and excitement for a good pre-code are insane.
This film would be ‘new to me,’ but I’ll drop everything for a William Powell film. According to TCM’s Film Festival website the film is about a woman, bored with her husband and lover, a baroness of Vienna (Kay Francis) begins to fall for the charms of a debonair jewel thief (William Powell) in this pre-Code comedy. (Girl Same-how do you not fall for William Powell?)
The larger schedule of films still hasn’t dropped and probably won’t for another month, but the wait and dreaming of what films could make this list are just as fun as getting the whole list.