As the editor of a newspaper, I often come across interesting old classic film articles while doing research. From time to time I'll reprint them here to share. 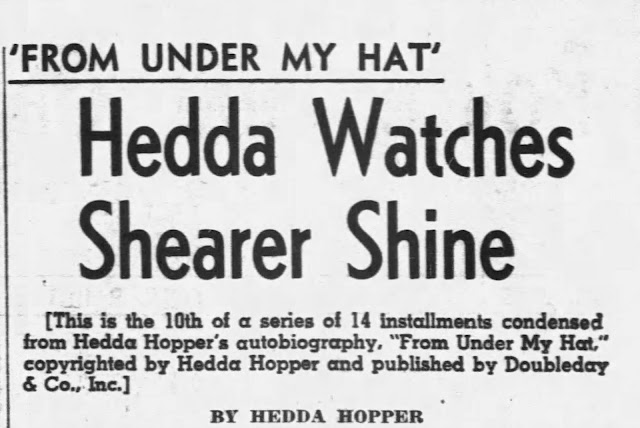 The night Norma got under Carole Lombard’s skin.

(This is the 10th in a series of 14 installments condensed from Hedda Hopper’s autobiography, “From Under My Hat,” copyrighted by Hedda Hopper and published by Doubleday  Co., Inc.)

Norma Shearer and I worked until midnight one night, then started together for our dressing rooms. It was dark and seemed very quiet.

Sitting in the doorway of my room was a lion. I let out a screech you could have heard in Pomona and – Norma at my heels-ran back toward the set. I found a man there and tried to tell him about it, but my teeth were chattering so I could hardly get out the words.

Norma met Irving Thalberg at the Selig Zoo. Many stars had no time for Irving. Let it be said that he had little time for girls. He hadn’t yet struck it rich, and some actresses could never see beyond their own noses. But, if you could only see it, Irving was climbing up the golden ladder and Norma had her food on the first rung of success.

Norma married Thalberg and he made her No. 1 star at Metro. Naturally, Norma got first whack at everything – stories, writers, directors, leading men.

When their first child was born, Irving’s parents still were living with them. His mother ran the household. The birth of Irving Jr. ushered in a new era in Hollywood customs. Having babies was ordinary for mortals, not for stars.

Norma cracked that tradition. The public had never really allowed it anyway; the producers only imagined it. Anyhow, after her babies came, Norma was more popular than ever. Maternity didn’t shade her love scenes on screen.

I’ve seen premiers in my time, but that “Marie Antoinette” premiere at the Carthay Circle Theater darn near blinded the citizens. The Trocadero shindig later was no lawn party either.

When Norma arrived at the Troc. She went straight to the power room, where her maid was waiting. That’s the first and only time I ever saw a hostess change dresses mid-party. She came out of the powder room in a handmade black-sequined sheath so tight she had to watch not only her step but her breathing.

Norma seemed to have a special knack for getting under the skin of her pals and bustling up their parties. She did a man-sized job on Carole Lombard. Carole was Chairman of our last Mayfair Ball, and you could trust her to think up something original. She surprised us by announcing we would go dignified and have a White Ball. The stars worked at fever pitch ordering their white gowns. I had almost more fun scheming to outshine my rivals than attending the party.

The ball was held in the old Victor Hugo Restaurant in Beverly Hills; it was the perfect setting for all those beautiful white dresses. At the height of the gaiety, Norma Shearer made her usual late dazzling entrance, it was too dazzling. Norma had on a bright red gown. Carole, who’d played jokes on other all her life couldn’t take this one. She ran for the nearest exit, Clark Gable ran after her. They both saw red at the same moment. This was the only time I ever saw Carole’s perpetual good humor shaken. She saw the funny side of life always and laughed more at herself than the other fellow.