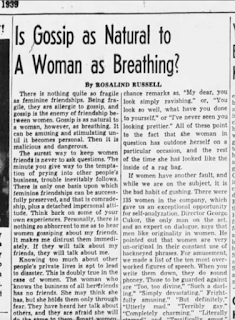 As the editor of a newspaper, I often come across interesting old classic film articles while doing research. From time to time I'll share some here.

Is Gossip as Natural to A Woman as Breathing?

There is nothing quite so fragile as feminine friendships. Being fragile, they are allergic to gossip, and gossip is the enemy of friendship between women. gossip is as natural to a woman, however, as breathing. It can be amusing and stimulating until it becomes personal. Then it is malicious and dangerous.

The surest way to keep women friends is never to ask questions. The minute you give way to temptation of prying into other people's business, trouble inevitably follows. There is only one basis upon which feminine friendships can be successfully preserved, and that is comradeship, plus a detached impersonal attitude. Think back on some of your own experiences. Personally, there is nothing so abhorrent to me as to hear women gossiping about my friends. It makes me distrust them immediately. If they will talk about my friends, they will talk about me.

Knowing too much about other people's private lives is apt to lead to disaster. This I doubly true in the case of women. The woman who knows the business of all her friends has no friends. She may think she has, but she holds them only through fear. They have heard her talk about others, and they are afraid she will do the same to them. Smart women, who really value the feminine friendships they have cultivated, will always hedge away from finding out any bit of gossip about their intimates. It goes back to the old truism, "familiarity breeding contempt."

ARE ALL WOMEN CATS?

These observations come fro the manner in which I try to conduct my own friendships, and from playing Sylvia, the gossip in "The Women," In writing her witty and humorous play, Clare Booth took the attitude that all women are cats, and wouldn't be interesting if they were otherwise. I do not entirely agree with her opinion of women, but many truths are self-evident in the play and the picture which I had the pleasure of making at Metro-Goldwyn-Mayer with Norma Shearer and Joan Crawford. All of the characters in the picture are recognizable types, and Sylvia notably so. Sylvia is the kind of woman who can't resist asking personal questions, and then repeating answers at the first opportunity. As a result, she ends up without a friend, and moreover comes close to ruining the life of her closest friend, Mary Haines. If Sylvia were not played with the most delicious good humor, she would be the worst kind of "heavy."

Don't forget that compliments coming from the lips of a woman are decidedly different from those coming from a man. The words may be the same, but the inference is oh, so different. Never tell a woman that she has lost weight. In the face of it, it sounds very pleasing, but nine women out of ten will interpret it as a slam. In short, if you notice has lost weight, then at some times or another, it is evident you thought she was too fat. On the same premise are such chance remarks as, "My dear, you look simply ravishing," or "You look so well, what have you done to yourself," or "I've never seen you looking prettier." all of these point to the fact that the woman in question has outdone herself on a particular occasion, and the rest of the time she had looked like the inside of a rag bag.

If women have another fault, and while we are on the subject, it is the bad habit of gushing. There were 135 women in the company, which gave us an exceptional opportunity for self-analyzation. Director George Cukor, the only man on the set and an expert on dialogue said that men like originality in women. He pointed out that women are very un-original in their constant use of hackneyed phrases. For amusement, we made a list of ten most overworked figures of speech. When you write them down, they do sound phony. Those to be guarded against are "too, too diving," "Such a darling," "Simply devastating," "Frightfully Amusing," "But definitely," "Utterly mad," "Terribly gay," "Completely charming," "Literally starved," and "Terrifically smug." Keep away from them, girls, boyfriends don't like them.

February 01, 2020
Guys, we have roughly eight weeks to go until the Turner Classic Film Festival, can you believe it? (UPDATED Feb. 2020 in time for my 5th Festival!) To some, the festival has become second nature or something you just do, a right. For some of us, it's still this surreal, magical experience that we have to save every extra nickel we earn so we can attend. The moment I get home from the festival, I'm counting the days down until the next one. It's what I look forward to most all year long. This year will be my third trip to Hollywood for the TCM Film Festival, and it still feels like my first time. Eight weeks out and I still have butterflies in my stomach. I’m excited, and as I write this my heart beats faster and harder as I think about what films they have yet to announce,  Wuthering Heights  perhaps? Possibly,  Gone With the Wind ? Probably not, they ran that a few years back, before I could afford to attend, dang. Before my first trip in 2016 I researched so
1 comment
Read more

June 01, 2016
The fire alarms had just gone off as we waited to see  Guess Who’s Coming to Dinner?  And I was stuck outside on the second story of the theater complex in a crowd of people waiting it out. For a good 20 minutes, I watched people and took in the sights, sounds and smells of Hollywood, most not good. Once we were given the all-clear, we went in to retrieve the drinks we had yet to touch. The bartender made us new drinks and didn’t charge us, but we were due in our seats in a couple of minutes. I took a couple of sips then trashed mine the moment I saw Ken Jenkins by the entrance door. We were being herded into our line, but nobody noticed that it was Ken Jenkins! He was there alone, and nobody was asking him for an autograph. I had to run past him to get my spot, but I smiled and waved at the man who was married to Katharine Houghton. The man also happened to play Dr. Bob Kelso on Scrubs and also happened to play Courtney Cox’s dad on Cougar Town. I had several people ask me who
Post a Comment
Read more